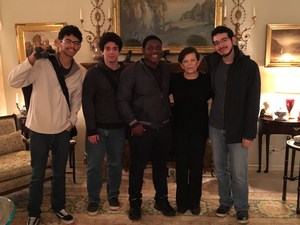 The students and staff of West High School (WHS) are being recognized for excellence with a Civic Learning Award of Merit. WHS was given the prestigious honor by the State of California for cross-disciplinary work and dedication to civic education through the History Day programs on campus.

According to the California Department of Education, the awards are designed to celebrate successful efforts to engage students in civic learning and to identify successful models that can be replicated in other schools.

The History Day program at WHS combines the Social Studies Department with the Career Technical Education and Video Production classes to explore and preserve the history of Kern County. Teams from WHS compete at the county, state, and national History Day contests and have excelled in aspects of educating the students and the promotion of civic learning. Two group documentary teams from WHS placed in first and second at the county competition in Bakersfield on March 4, 2017. The 1st Place Team produced at ten minute documentary on the segregation case of Mendez v. Westminster from 1947. They will be representing Bakersfield when they compete at the state level in May.

The 1st Place team consists of Adrian Rodriguez, Luis Medina, Darius Harris, and Edgar Aguirre. They say they learned a great deal about segregation, but also used every aspect of the Video Production class to create their documentary including interview skills, video recording, editing, writing, and using voicing techniques to tell the story of those who lived through the historic event.