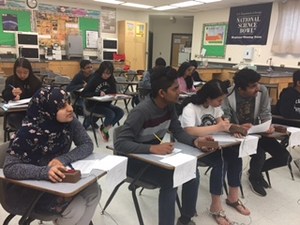 The Science Bowl team from Stockdale High School sets it's sights on competing with the best in the nation.

The Science Bowl team at Stockdale High School is also busy with students preparing for a head-to-head competition at the National Science Bowl in Washington D.C.

The Stockdale team is among the regional competition winners and received an all-expense paid trip to compete against teams from across the country.  Nationals will be held April 27-May 1, 2017.  These dedicated students put in hours of studying, brushing up on math, chemistry, biology, physics, astronomy, and earth science.  Their advisors are very proud of their dedication and commitment.

“Their thirst for knowledge has inspired us in ongoing education and staying current with science and technological advances.  Having to coach students who face disappointment during a match, we have all learned how to develop resilience and have learned to stay positive.” - Stacy Baehr, Science Bowl Advisor, StHS