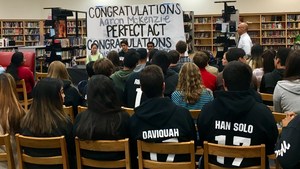 Standout students, their parents, and teachers were recognized for incredible academic accomplishments at Stockdale High School.

Three remarkable students at Stockdale High School (STHS) were the center of attention at a special reception in their honor in November.

The STHS library was packed with parents, classmates, and staff to recognize the scholastic achievements of seniors Aaron McKenzie, Jennifer Pusavat and Abhishek Srinivas.

McKenzie, who is a gifted cellist and STHS Varsity Track Team Captain earned a perfect ACT score. Out of 1.8 million students who take the ACT each year, only about 1000 get the highest possible score of 36. The range for the ACT is 12-36.  The perfect 36 score represents the top .083% of test takers.  As a comparison, a score of 35 is the top 1% of test takers. Aaron scored in the top 1/10 of 1%.

“This young man’s top score is a reflection of his aptitude as well as his education, and demonstrates very clearly the impact his teachers have had on his test performance.” - Troy Mehlhaff, Counselor, STHS

McKenzie’s parents were in attendance and his mother offered advice to others regarding preparation for exams like the ACT.

“Parents should tell their children that one test does not make or break their academic careers or determine their ability to succeed in college or in life. Yes, prepare as best you can by studying, taking prep courses or tests, but don’t put undue stress and pressure on yourself to the point that it may be counterproductive. In fact, Aaron spent very little time preparing for the ACT specifically. He studied much more for the SAT and end-of-year finals at school. He approached the ACT with a more relaxed “Let’s just see how I do” attitude. I think that helped him achieve the top score that surprised us all!” – Sophia McKenzie, Aarons’ mother

Jennifer Pusavat and Abhishek Srinivas are seniors at STHS and were both recently named semifinalists in the prestigious National Merit Scholarship program. They were two of the 1.6 million high school students who took the PSTA/NMSQT and were notified in September they were among only 16,000 semifinalists and the highest scoring program participants in the state.

“I am very proud of these students, and all the talented young people we have in the Class of 2017. I would also like to applaud the staff, teachers, and the families here today for all their hard work.” – Ramon Hendrix

Pusavat plays the violin in the orchestra program at STHS, participates in the Science Bowl, and says she is deeply invested in chemistry.

Srinivas also excels in extra-curricular activities including band, forensics, mock trail, and tennis. In his junior year, he received a perfect score of 2400 on his SAT.

All three students are in the process of applying to colleges across the nation and are exploring many career fields including research, engineering, and medicine.